The most important story in health care today involves the release of the Kaiser Family Foundation’s annual survey of employer-sponsored health insurance premiums.  According to the survey, premiums rose by $56 per month, or $672 per year, for the average family health insurance plan – that’s an increase of more than 4 percent, more than twice the rate of inflation.

As a reminder, candidate Obama said repeatedly his bill would CUT premiums by an average of $2,500 per family – meaning premiums would go DOWN, not merely just “go up by less than projected.”  The campaign also promised that that those reductions would occur within Obama’s first term.  However, the annual Kaiser Foundation survey of employer-provided insurance found that average family premiums totaled $12,680 in 2008, $13,375 in 2009, $13,770 in 2010, $15,073 in 2011, and $15,745 this year.  In other words, while candidate Obama promised premiums would fall by $2,500 on average, premiums have risen by $3,065 since Barack Obama was elected President.  (A visual representation of this broken promise – updated to reflect this year’s survey data – is attached below.)

Other conclusions from the Kaiser study:

Just before Obamacare passed, former Speaker Pelosi famously said we had to pass the bill to find out what’s in it.  Today we have once again found out just how much the 2700-page law is failing to live up to the President’s promises. 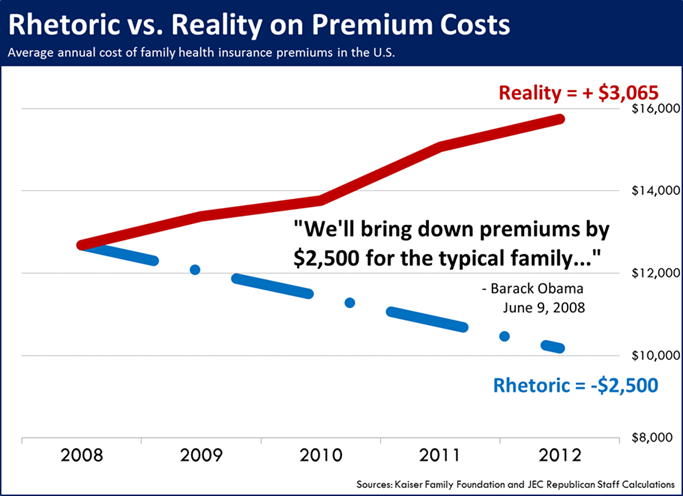