During last night’s Iowa caucuses, President Obama attempted to divert attention from the Republican race by holding a video conference with supporters, and purchasing ads on the Des Moines Register homepage.  One of the claims the President’s campaign made is that the Administration followed through on its promise and “made health care affordable.”  The reality however is that Obama, and Obamacare, have made health care unaffordable to millions of American families.

Candidate Obama repeatedly promised his health care plan would LOWER premiums by $2,500 per family, and do so within his first term.  But the price of the average employer-sponsored plan ROSE by more than $2,200 per family since Obama was first elected in 2008, according to studies from the Kaiser Family Foundation.  In other words, Obama’s abandoned promise has cost American families over $4,700 per year – a $2,200 premium increase compared to a $2,500 promised premium reduction.  That’s making health care UN-affordable.

When he flip-flopped on supporting an individual mandate, President Obama said that this change from his campaign position was premised on the premise that “if we are going to make people responsible for owning health insurance, we must make health care affordable.”  Forcing people to buy health insurance – after breaking a promise to make health care affordable by cutting premiums $2,500 per family – isn’t helping the middle class; it’s killing them. 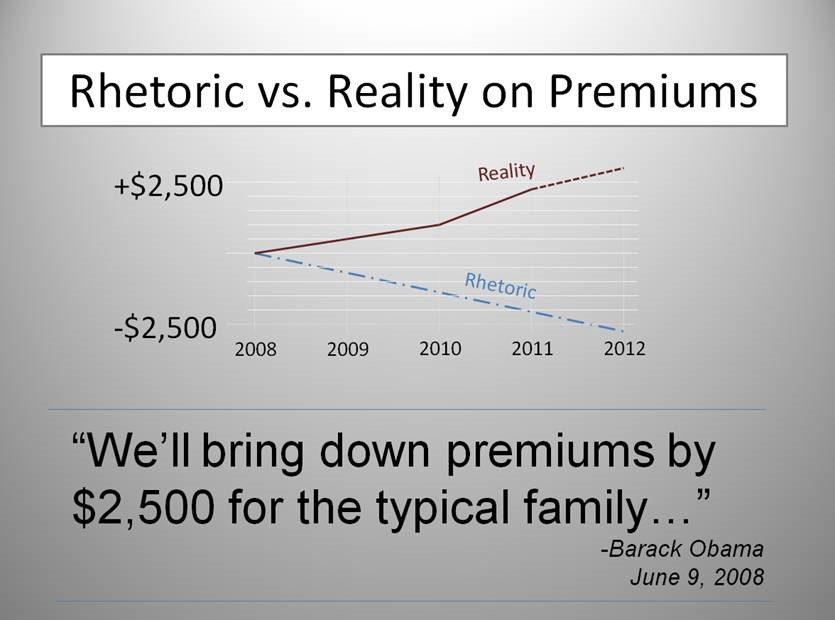