Yesterday the President gave another campaign-style speech in New York, complete with a five point “to-do list” for Congress to tackle yet this year.  (Of course, there are dozens of jobs bills being blocked by Democrats in the Senate, but that’s a different story.)  The more pressing issue is why President Obama hasn’t tackled what he put on his OWN to-do list – namely, cutting health insurance premiums by $2,500 per family.

Candidate Obama repeatedly promised that he would cut premiums for struggling middle-class families by $2,500 per year. (Interestingly, the Obama campaign removed all these speeches from their website; their memory still lingers here, however.)  Both candidate Obama and his campaign were very clear that this promised premium cut would happen sooner rather than later; in July 2008, Jason Furman – who remains a senior economic advisor within the Administration – told the New York Times that “we think we could get to $2,500 in savings by the end of the first term, or be very close to it.”

Yet as the below chart demonstrates, while candidate Obama promised that premiums would go DOWN by $2,500, they actually have gone UP by nearly as much – from $12,680 in 2008 to $15,073 in 2011, according to Kaiser data.  And the Congressional Budget Office found that Obamacare’s new insurance mandates will raise premiums on the individual market by an additional $2,100 per family.

So the question now is whether the President will spend the next six months going around campaigning in an attempt to blame others for his own broken promises, or will take actions – like repealing Obamacare, allowing cross-state purchasing of insurance, and enacting small business health plans – that will actually reduce premium costs and help President Obama keep candidate Obama’s promise.  Time’s a wastin’, Mr. President… 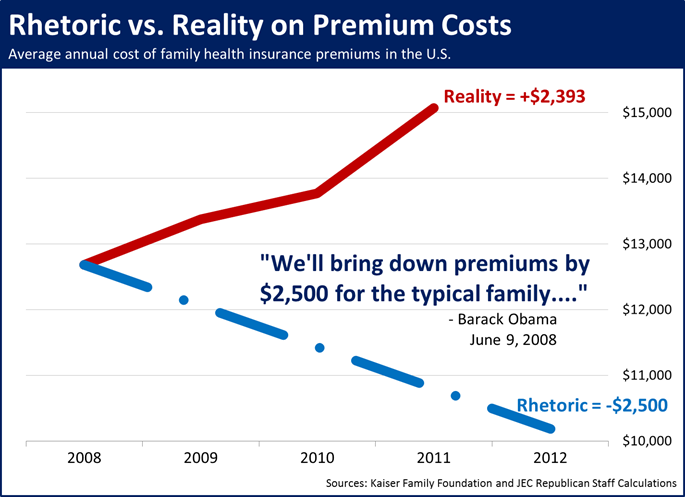