Our Entitlement Problem for the Next Generation, in One CBO Chart 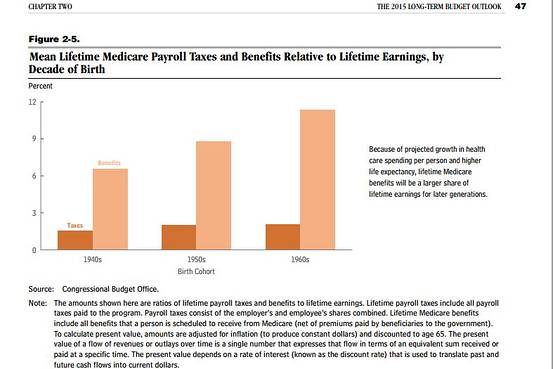 The Congressional Budget Office released its annual update last week regarding the long-term budget outlook. In that document, one chart in particular demonstrated the financial difficulties caused by an entitlement system that has promised Americans more in benefits than it can deliver.

These findings echo reports by Eugene Steuerle and colleagues at the Urban Institute analyzing Social Security and Medicare benefits over a lifetime. Their most recent series of estimates, released in November 2013, found that a two-earner couple in which both make average wages and turn 65 in 2015 will receive more than three times as much in lifetime Medicare benefits ($427,000) as they paid over their career in Medicare taxes ($141,000).

It’s noteworthy that the dedicated Medicare payroll tax is not the program’s only source of financing. While Medicare Part A (hospital insurance) is largely funded through the direct payroll tax, general government revenues fund Medicare Part B coverage of physician services and Part D coverage of prescription drugs. In other words, most individuals fund Medicare through revenue sources beyond their payroll taxes—namely the income tax— even if quantifying the size of that contribution proves more difficult.

Still, the CBO chart illustrates two major forces squeezing Medicare: Rising health costs and longer life spans are increasing the benefits paid, and average promised benefits do not remotely equate to average contributions made—undermining the principle of a social insurance model. With about 10,000 baby boomers on track to retire every day for a generation, these two trends will define our fiscal future. Policy makers would do well to address them sooner rather than later.

This post was originally published at the Wall Street Journal Think Tank blog.