You know the Biden administration realizes the political soup it finds itself in when White House officials try to discount a report a week before its release. A blog post by the Council of Economic Advisers published last Thursday attempted to do just that.

This Thursday, the federal Bureau of Economic Analysis will release its advance estimate of second-quarter gross domestic product (GDP) for the quarter that ended June 30. With previously released data showing that GDP shrank by 1.6 percent in the first quarter, and many projections estimating negative growth in the second as well, the report could confirm two straight quarters of negative economic growth—the technical definition of a recession.

The White House wants to minimize these data points as a mere distraction. But the way in which they would ignore the suffering faced by millions of American families demonstrates an administration out of touch with the middle-class Biden claims to represent.

The White House blog post tried to rebut the notion that two-quarters of negative growth constitutes a recession, calling that metric “neither the official definition nor the way economists evaluate the state of the business cycle.” The administration instead claimed that assessments of the economy should take “a holistic look at the data,” and that, due to “one of the strongest labor markets on record and an elevated stock of household savings,” the economy likely continues to grow.

White House economists can discuss “the state of the business cycle” all they want, but how do families evaluate such claims? Most families would logically rate the economy based on the state of their own personal finances. And on that front, American households have spent the past year getting kicked in the teeth.

The most recent data from the Bureau of Labor Statistics shows that, over the past year, average real (i.e., after inflation) hourly earnings have declined by 3.6 percent. Worse yet, real weekly earnings have declined by 4.4 percent. And as the below chart demonstrates, families have lost more ground in the past few months, as inflation and rising gas prices eat away at more and more of their earnings: 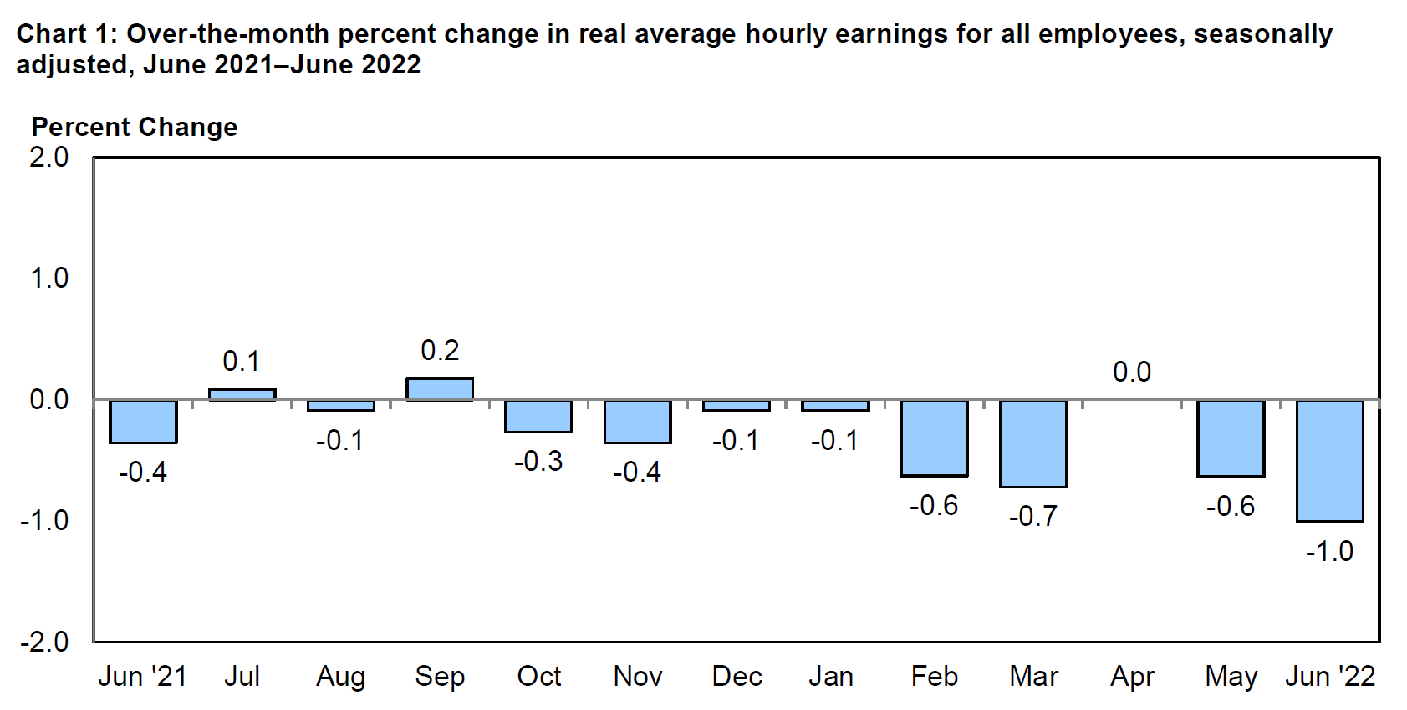 Only an economist—or an out-of-touch Washington politician—could claim that an economy where the average paycheck stretches less and less each week represents anything other than a massive policy failure.

Biden and the administration continue to duck and dodge blame for the economy’s sorry state. When the first quarter’s GDP numbers showed negative growth, the president tried to slough them off as caused by “technical factors.” Even the left-wing media couldn’t help but consider that response as tone-deaf as last year’s excuse that higher inflation would prove “transitory.” (News flash: It didn’t.)

The reality shows how Biden owns this record of economic failure in myriad ways. Last year, even Democrats such as former Treasury Secretary Larry Summers warned that the administration’s spending spree under the guise of “Covid relief” would stoke inflation. Biden and the left, desperate to achieve all the big-government spending plans they have long sought, ignored those warnings—and the American people have paid the price.

The administration tried to punt responsibility for curbing inflation to the Federal Reserve, but Biden himself just re-nominated Jerome Powell for another term as Fed chairman. Given that one of his predecessors, Ben Bernanke, admitted that Powell made a “mistake” by failing to recognize the spike in inflation last year, why on earth would Biden keep the captain who couldn’t spot the proverbial iceberg at the helm of the ship?

Biden and the White House have tried to blame Vladimir Putin’s invasion of Ukraine for the spike in gas and food prices. But beyond the fact that gas prices started rising well before Putin launched his invasion, Biden’s weakness—from the disastrous withdrawal from Afghanistan to talk of doing nothing if Putin went ahead with a “minor incursion”—only helped spur on the Russian invasion that has caused global economic shocks.

Conversely, the administration is now attempting to take credit for a modest decline in gas prices in recent weeks. But that decline in gas prices stems in large part from a global reduction in the price of crude oil, due to fears of a recession. If Biden wants to take credit for this slight fall in gas prices to “only” $4.50 a gallon, does that mean he also wants to take “credit” for “leading” the economy into such a situation that most experts consider a recession anywhere from likely to inevitable? (For that matter, will he also take the “credit” for having increased gas prices from roughly $2.31 a gallon—no, that’s not a typo—when he took office?)

As the old saying goes, coming to grips with a bad situation involves first admitting that you have a problem. Rather than admitting the damage their feckless and spendthrift policies have inflicted on millions of families nationwide, the White House and the professional left keep deflecting and denying responsibility for this economic debacle. Their efforts not only fail to recognize the harm the middle-class faces every day from this administration—they also insult the intelligence of the American people to boot.