A PDF of this document is available on the America Next website.

Regardless of their opinions on Obamacare, the American people remain unified on one key issue: When it comes to health care and heath insurance, they are most worried about its rising costs. And on that front, Obamacare—by President Obama’s own standards—has fallen woefully short. Analysis conducted by America Next quantifies the dollar impact behind President Obama’s broken promise that his health plan would reduce costs—providing over 1.2 trillion reasons why Obamacare has failed and should be repealed.

During his 2008 campaign, then-Senator Obama promised on numerous occasions that his plan would reduce premium costs for the average family by $2,500 per year.1 His campaign staff went even further; Jason Furman, the campaign’s economic policy director—and currently the Chairman of President Obama’s Council of Economic Advisors—alleged that “we think we could get to $2,500 in savings by the end of the first term, or be very close to it.”2

Contrary to candidate Obama’s promise, health insurance premiums have continued to rise every year President Obama has been in office. Compared to a baseline year of 2008—the year Barack Obama was elected—the average family premium for employer-sponsored coverage rose by more than $2,500—$3,671, to be precise.3 Over that same period, Americans have faced a cumulative $6,388 per individual, and $18,610 per family, in higher premium costs because President Obama failed to achieve the reductions he promised from his health plan.

Individually, ever-rising insurance premiums place a tremendous squeeze on a hollowed-out American middle class—but collectively, these costs amount to a massive weight on an American economy struggling to grow. All told, the American people have faced $1.2 trillion in higher health insurance premiums due to Obamacare’s failure to deliver.

Given annual full-time private sector compensation rates, the amount spent on higher health insurance premiums equals the cost of an average of 3.9 million jobs each year, and nearly 6 million jobs in 2013 alone. With the labor force participation rate at 36-year lows, Obamacare’s failure to deliver lower health insurance premiums represents a further drag impeding the growth of the economy and jobs.4 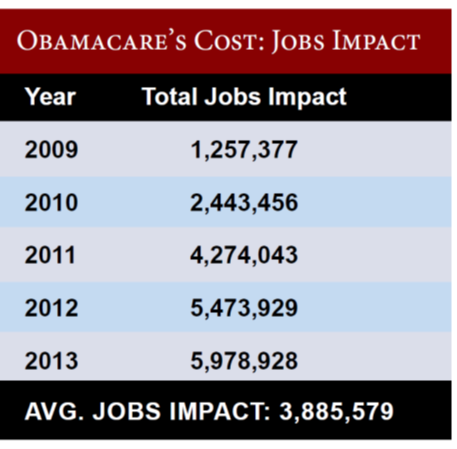 In August 2012, Politifact examined the Obama campaign’s 2008 promise of lower premiums with the inexorable trend of rising health costs:

In assessing this promise, we consider the following: An author of the $2,500 figure has disavowed its use as it relates to premiums alone. An independent health care analyst projects that premiums will go up for the typical family. The federal agency implementing [Obamacare] did not provide evidence that premiums will go down for the typical family. We rate this a Promise Broken.7

The American people recognize the President’s rhetoric as a promise broken too. It’s why Obamacare should be repealed in its entirety, and why conservatives should focus on alternatives—such as those in the America Next health plan—that will lower health costs and premiums, not raise them further.

Insurance Coverage: The analysis utilizes Census Bureau data regarding the number of individuals with private, employer-provided health insurance and private, directly purchased health insurance. The analysis further uses data from the Department of Health and Human Services’ Medical Expenditure Panel Survey (MEPS) to categorize the number of Americans holding family insurance coverage, and the number of Americans with self-only insurance plans. The average number of participants in a family plan comes from a breakout of family policies purchased by size, as reported by ehealthinsurance.com.

Premiums: The analysis incorporates data from the Kaiser Family Foundation/ Health Research and Education Trust annual survey of employer-provided health insurance to determine average premiums. For those Americans with direct-purchase insurance, premiums data come from annual reports on the Cost and Benefits of Individual Health Insurance issued by ehealthinsurance.com.

The analysis assumes the $2,500 reduction in average family premiums by the end of President Obama’s first term would be achieved as a $625 reduction each year (i.e., $625 reduction in 2009, $1,250 reduction in 2010, $1,875 in 2011, and $2,500 in 2012), with no additional reductions thereafter. The relevant reductions for self-only plan premiums are $927 for employer-provided insurance and $1,077 for directly-purchased insurance over the course of President Obama’s first term— based on the ratio of individual to family premium costs in 2008, when the promise was made.

Jobs Estimate: To illustrate the economic opportunity costs of the broken promise, the analysis divided the aggregate premium impact by the average employee compensation for full-time, private sector employees in the relevant year, as compiled by the Bureau of Labor Statistics’ Employer Costs for Employee Compensation Survey.