The Opportunity Cost of Fixing Obamacare 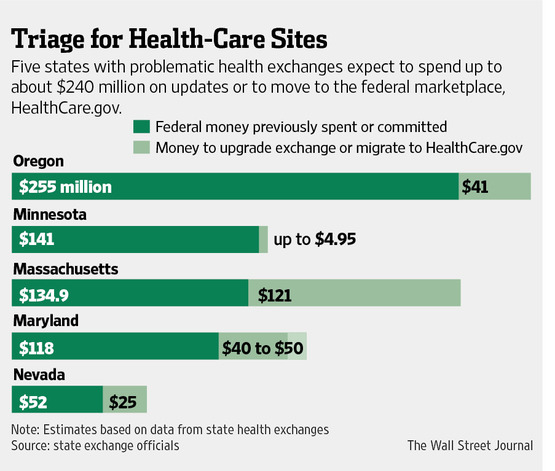 The Wall Street Journal reported Wednesday on five states considering whether to spend additional dollars to fix their health insurance exchanges or move to the federal exchange. Some lawmakers believe that “upgrading or sustaining the exchanges could deplete funding for roads, education or other vital programs.”

States trying to fix balky exchanges face technical and logistical problems—and two looming deadlines. The first is Nov. 15, the start of the open-enrollment period for 2015. The second, and perhaps more important, is Jan. 1—the date the U.S. Department of Health and Human Services loses authority to issue grants to states for their exchanges.

With the prospect of additional grants from Washington unavailable next year, some states are rethinking their fiscal priorities. Rep. John Delaney (D., Md.), who opposes efforts in Maryland to spend as much as $50 million more on its exchange, was quoted as saying: “You can’t just print money in the states. It could come from education or other important programs.”

Of course, the same arguments could be made regarding Obamacare’s Medicaid expansion. Despite a high federal match, expansion brings with it administrative costs—in the tens of billions, by a 2010 Heritage Foundation estimate—and state shares of spending would increase in future years.

The Fiscal Survey of States underscores the squeeze Medicaid has placed on states’ other spending priorities. In fiscal 2013, states collectively reduced higher education spending by more than $1 billion, even as Medicaid outlays grew by nearly $500 million.

It’s good that legislators, including supporters of the Affordable Care Act, are publicly recognizing the opportunity costs associated with greater state spending on health care. But it’s a debate that should have transpired years ago.

This post was originally published at the Wall Street Journal Think Tank blog.